In a countdown fashion over the next three weeks, I will discuss the top 3 reasons why the law of attraction is not working for you from a neurological perspective. I will also be sharing some powerful techniques and tools to help you break free from the mind prison that you’ve unconsciously created. So let’s get started!

Reason # 3: The Law of Attraction is not working for you because your nervous system doesn’t think it’s safe for you.

The first thing you must understand about your nervous system is that its operating system is based on safety and survival. Its job is to protect you from all potential threats internally and externally. It accomplishes this by keeping you the same. In scientific terminology it’s known as maintaining homeostasis or equilibrium. It is on constant vigilance over your physical environment making sure that you and it are an energetic match. Anything different IE; more time, more love, more money, more freedom means threat and potential harm.

On the physical level this is easy to understand when you consider an oncoming train, standing on the ledge of the Grand Canyon or some opposing figure holding a knife to your throat. All of these experiences will evoke what is called the fight or flight response which is when your autonomic nervous system (ANS) takes over in order to eliminate the threat or remove you from its presence.

Your ANS responds the exact same way when you pursue a goal, dream or desire that IT thinks will potentially cause you harm. It reacts to these ambitions by creating self-sabotaging thoughts, feelings and behaviors that will ultimately cause you to quit your pursuit. Remember, its job is to prevent change by keeping things the same. You can also blame your autonomic nervous system for determining what command the Law of Attraction responds to. (More on this in the next post – Reason #2)

Now at this point most people respond by saying, “Dr. Matt that doesn’t make any sense, how can more time, money, freedom, love and happiness cause me harm?” And my response to that question is, “Who said your sub-conscious mind makes sense?!”  In fact, your sub-conscious mind (brain stem, cerebellum and mid brain) works through association not logical, reasonable or rational thought processes like your surface-conscious mind (frontal lobe/neocortex).

What is also critical to understand at this point is that once your belief system is formed it becomes your operating system and your ANS guards it as if your life depends on it, just like breathing, circulation and digestion. Anything that goes against it, including your hopes, dreams, desires and goals, must be destroyed like an enemy because all those things represent something different than the accepted norm… and different is threatening.

Are you getting this? So let’s recap; your ANS only cares about one thing: your SAFETY. Your sub-conscious mind defines safety based on what it has been programmed to think from your PAST childhood experiences called your belief system. Anything your HEAD (surface-conscious) WANTS that is different from what your HEART(sub-conscious) THINKS ain’t gonna happen… PERIOD. Hence, one reason why the law of attraction is not working for you. More to come! 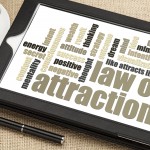